BCS, The Chartered Institute for IT launched the Digital Skills Network recently in London. The event was attended by tech companies, think tanks and thought leaders across a multitude of both public and private sectors.

The purpose is for BCS to provoke discussion, facilitate the conversation between all interested parties, government departments and industry stakeholders to tackle some of the most pressing issues in skills shortages in the UK.

The launch of the network follows the recent State of the Nation report carried out by BCS examining ONS data and highlighting that while the UK has always had some skills shortages, the global pandemic and the acceleration of IT not only in the way we work but the way we live day to day, has meant the need for action on education has become even more critical.

To discuss the themes, look for solutions and share experiences, the day was devoted to a handful of keynote speakers and a series of “break out” sessions which involved smaller numbers with key findings relayed to the group following the discussions.

Here are our highlights of the event:

“We are the only country in the world that has a statutory computing education from 5-16 years.”

So began Bill Mitchell, Policy Director from BCS. Bill argued that computational thinking skills are essential for the next generation to both understand and to challenge the world. The world is dealing with the fallout from global warming, the war in Ukraine, Brexit, a slump in birth rates and a need to address social issues with ‘levelling up’. There is a need to have the right data in place and the right education to make all this understandable – to work out the bigger picture.

Alex Burghart MP: “I have never known an economy more hungry for skills”

It was a great privilege to have Alex Burghart MP for Brentwood and Ongar and Parliamentary Under-Secretary of State for Apprenticeships and Skills join us at the event. Representing the opinions of government, Burghart gave a speech about driving the skills revolution with skills that are relevant to employers to tackle the 1.3m current vacancies in tech.

He proudly talked about the new gold standards in technical qualifications, T-levels where students undertake a nine week work placement to make them more job ready upon leaving school. He also talked about how colleges are seeing the benefit of working with industry to make qualifications fit for purpose. “Colleges are starting to realise that collaboration with industry is the future.”

Burghart believes that, simplifying the qualification offering to make it easier for students and parents to navigate while enhancing what is on offer will be a transformative step in tackling the existing skills gaps.

Responding to the digital divide 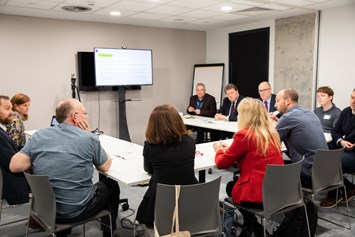 Julia Adamson - Director of Education, BCS then presented the findings of the breakout group who were looking at ‘Responding to the Digital Divide’.

“Teachers are having to deliver digital education. But digital is moving so quickly. The only way this is going to move forward is for industry to support the learning of teachers. It’s not enough to say that young people are coming through without the digital skills, we must deliver that education now. The problem is if we don’t deal with that now, the digital divide will get wider.”

The panel believed the way forward is to teach using real life problems. Show teachers what digital is used for and get teachers to go back to the classroom and share. There were also discussions about successful interventions such as the Morgan Stanley volunteer group that went into Tower Hamlets. Mike who worked in the volunteer group said: “If you go out to primary school it’s difficult to see what impact you’ve made. If you go out to GCSE level, you can see the impact you’ve made on grades.” The result of Morgan Stanley going into a school of C/D level achievers was to push their results up by three grades and open the door to a career in the city.

Take outs from the session were:

Invited to the event, but unfortunately not able to attend on the day, Adam Turner of Defra summed up the whole point of the event. His question was: “If BCS don’t have these conversations, who will?”

To find out more about the Digital Skills Network click here.