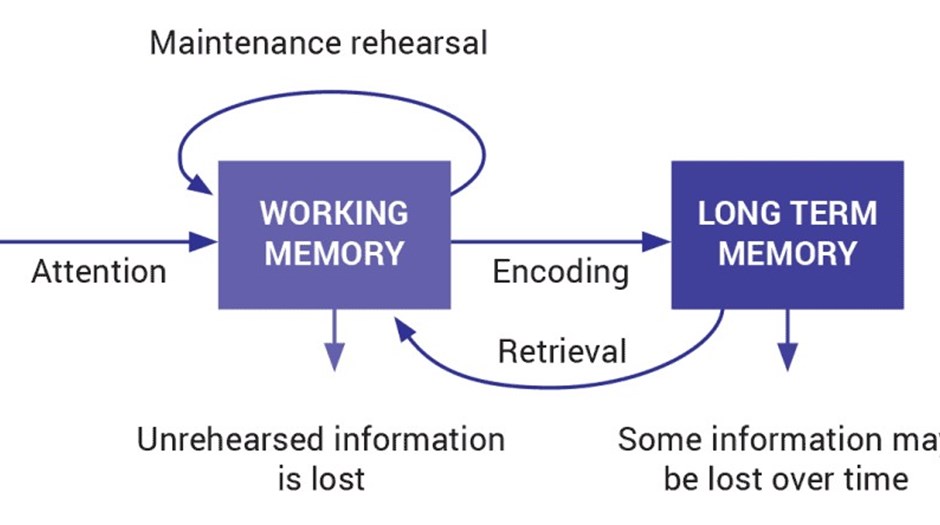 The evidence and theory from cognitive science says that presenting new material in small steps is an effective strategy to use with all students to avoid cognitive load. Sweller et al. (2011) summarised this research on cognitive load and the applications of this within education. Cognitive Load Theory builds on the multi-store model of human memory (Atkinson and Shiffrin, 1968) where the working memory receives, rehearse and retrieves information from either the sensory memory or the long-term memory. Long-Term Memory (LTM) holds a permanent and massive body of knowledge and skills in what is called schema. Working memory is the part of the brain that receives the immediate information through our senses. Working memory allows us to think creatively and solve problems, however, it has two limitations. Firstly, it is short-lived. Secondly, it is only capable of processing up to approximately seven things at a time (Miller, 1956), meaning that if too much new materials are presented, it will be overloaded.

It is well known that experts employ automated retrieval processes to recall information from highly organized schema in LTM; During recalling activities, knowledge is retrieved from Long-Term Memory into working memory, therefore, regular recalling and retrieving practice improves the efficiency and storage of knowledge within schema that will be needed by working memory when solving a problem. This process gradually become automated so novices can progress towards expert status. Consequently, there are two main strategies to alleviate the limits of working memory; schema acquisition, which allows us to chunk information into meaningful units, and automation of procedural knowledge (Wilson & Cole, 1996).

Finally, just to share some specific strategies that could reduce cognitive load in programming:

A-Level Computer Science theory and the advanced programming involved within the course, can be daunting for students, especially the ones that did not take the subject at GCSE

Interesting post and examples, Javier, but I’m not sure I agree with the rider ‘especially the ones that did not take the subject at GCSE’. I found that I had some students who struggled despite having taken the GCSE CS, and others who coped well with the A-level without having taken the GCSE (or equivalent) and without any prior experience of programming. However, the latter were typically strong in mathematics. Years ago, I used to recite the mantra that ‘you don’t need to be good at maths to be good at programming’. I no longer subscribe to that view.

IMO (and, no, I can’t supply empirical data to support this this!) the best predictors for success at A-level CS (prior to starting the A-level) are, in descending order:

Hi Richard,
Good point. In my experience, It depends greatly on how keen the students are on the subject and of course, as you said above, their mathematical/logical skills.

Thanks for your comments. Really appreciated. That they are a musician

Of course, I’d always put a thumbs up to that one

and having been that student who would often be found weeping over my Maths homework I tend to subscribe to the view that Maths may not be the best predictor for either GCSE or A Level though my view does adjust for degree-level (with the caveat that this can depend on the course being undertaken). I’d actively encourage teachers to consider Music and MFL as a potential metric for CS suitability at either GCSE or A Level, and not just Maths. I know what the stats say, for the current cohorts, but I suspect we’re missing a number of equally capable students by ignoring other factors in their profile.

As for learning how to program: I have often said to my students “I can teach you how to program, but I cannot turn you into a programmer”. It’s similar to, “I can teach you how to play the piano, but I cannot turn you into a pianist”. Unless (and it’s a big unless), you spend time in between each lesson practicing, and then practicing some more! Just the same for my piano students - practice what I’ve asked you to practice and practice pieces that you like, in new styles or just fancy having a go at. Practice doesn’t necessarily make perfect but it helps. It helps to build memory, reinforce learning etc… It’s like any skill (art/craft) the more you do, the better you become and the tips given here are really good - thanks.